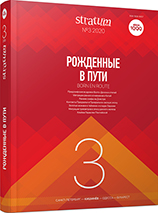 Summary/Abstract: The article examines 19 stone rounded altars without legs, with rims, decorated with a triple or single zigzag. The majority of the finds come from the Southern Urals, Volga region, on Southeast Ustyurt Plateau and Eastern shore of the Caspian Sea. Analysis of the burial grounds with the altars and associated finds concluded that such group of altars can be regarded as a chronologically relevant item, dated within the 4th century BC. It was observed that several undespoiled, or partly despoiled, burials have common features, such as orientation of the dead persons to the south, with minor deviations to the west or east, ceramic with impurity of talc and iron or bronze bracelets. Moreover, the finds of the altars in other regions could refer to the migrations of the Southern Trans-Urals nomads to the territory of the Southern Cis-Urals and Volga regions in the 4th century BC. Or, the Trans-Urals nomads could migrate to Southeast Ustyurt Plateau and Eastern shore of the Caspian Sea as a part of the Cis-Urals nomads.