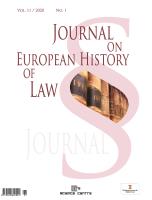 Summary/Abstract: Pre-modern and modern societies manifest different forms of political behavior and conduct. Pre-modern societies prefer authoritarian regimes, and exhibit more violence, power abuse, etc., and do not establish rule of law, democracy, liberty rights, and civil society. Modern societies, however, continuously established democratic structures and the rule of law. More, the political behavior of politicians specifically and humans generally have been becoming more civilized and rational, humane and pacific, moderate and empathic during the long process of modernization. It will be shown here that this civilization process of political behavior has been taking place on a global scale. However, the nations advance also regarding political behavior and customs on different speeds. Today’s developing nations partially manifest strange forms of political behavior that wouldn’t be even possible in the today’s most advanced nations. It is argued that political sciences by today have no eyes for these differences, and more, no scientific tools to address and to explain them. But they shape or make the bulk of politics both on the national and international level. The cognitive-developmental approach is worked out as the general theory of the political sciences that is able to illuminate these foundations of political life for the first time.