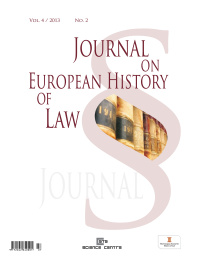 Summary/Abstract: The contention traces back to the 19th century that developmental psychology be helpful or necessary to understand human´s history. Nearly every early scholar in developmental psychology and many early ethnologists, sociologists, and historians contributed to this central idea. Despite the prevalence of cultural relativism in the past generation, some scholars have continued to conduct corresponding researches. For example, C. Radding published two articles in 1978 and 1979, which outlined the explanatory power developmental psychology has regarding the history of law. This article here extends and deepens these endeavours. It shows that developmental psychology explains the evolution from archaic to modern law and justice right across the whole world. The evolution from ordeals to rational proof systems in trials, from objective to subjective forms of responsibility, from sadistic to humane forms of punishment, from the holy law to democratic legislation, and the abolishment of trials against animals are to explain in terms of developmental psychology. The conclusions to be drawn go far beyond the area of the history of law. They rather touch both the foundations of historical research and the foundations of the humanities and social sciences.