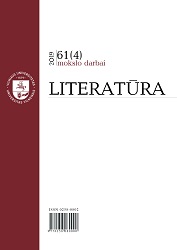 Summary/Abstract: The article seeks to answer the question what it is about the place which is called home in John McGahern’s novel That They May Face the Rising Sun (2002), i.e. what it is that substantiates it and being in it and a return to it. It argues that the homeplace in the narrative of the novel is defined by two symbolic planes: home is not only a physical and material and social place/ space within a certain geography in the novel, but also is of the ontological structure which is the meeting point of two trajectories that cross over: one of them is the vertical − the sacred, the other is the horizontal − the profane. The sacred puts into communication the three placial / spatial geographies in the narrative − heaven, earth and underworld; the profane marks the historical and the linear. It is within the homeplace in the narrative of the novel that existential being opens up through the tensions between the sacred and the profane. To build the argument, the paper draws on Mircea Eliade’s hermeneutics in The Sacred and the Profane (1959), Cosmos and History: The Myth of the Eternal Return (1954), and Images and Symbols: Studies in Religious Symbolism (1961).