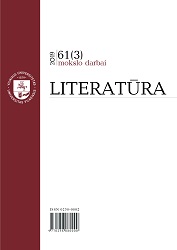 Summary/Abstract: The article analyses the problems of meaning and classification of the term anagnorisis (ἀναγνώρισις) as it is defined in Aristotle’s Poetics. It focuses on how the term anagnorisis is understood and interpreted by scholars – different translations and their interpretations of the same type of anagnorisis are compared. The article also searches for the answers to the following questions: does the term of anagnorisis discussed by Aristotle mean the recognition of persons or just any kind of truth in a drama; why do some translators differentiate five and others six types of anagnorisis; what did Aristotle bear in mind by distinguishing the type of anagnorisis called “the recognition made by a poet himself” (Arist. Poet. XVI; 1454b 30–31), whereas it is known that all recognitions were created by poets themselves; does “an anagnorisis by false reasoning (a false syllogism)” occur among tragedy characters or does the audience at first misjudge, but later recognises the characters correctly? The author of the article argues that the version of the Arabic manuscript of Aristotle’s Poetics is more logical, as it states that one of the characters (θατέρου) rather than a spectator (θεάτρου) mistakenly recognises another character (Arist. Poet. XVI, 1455a 12–17). First of all, Aristotle does not state specifically that this is the fifth (different from all the others) way of recognition, but while discussing the fourth way of “anagnorisis by reasoning”, he adds that there is also and “an anagnorisis by false reasoning (a false syllogism)” (Arist. Poet. XVI, 1455a 12–13). Secondly, the recognitions described by Aristotle in Part XVI of Poetics occur between two characters, when one has to recognise the other. Therefore, the author of the article does not agree with the opinion by Dana Munteanu (2002) – that in Menander’s comedy Epitrepontes, Smikrine’s false recognition should be referred to as an erroneous spectator’s recognition, whereas at the end of the play Menander depicts Smikrine as a misled spectator just observing the events uninvolved without understanding them properly. By such leaving the word “spectator” in Aristotle’s classification of the fifth type of anagnorisis and using it for a character observing the actions of the play uninvolved, an ambiguity occurs, as Aristotle himself in his Poetics speaks many times about an actual spectator of the tragedy, who while watching the action of the play experiences fear and pity. The author of the article thinks that the translation of chapter XVI of Aristotle’s Poetics by Marcelinas Ročka (1990) should be corrected in some places. At the fifth “recognition by false reasoning”, a note in square brackets stating that this is the last recognition should be omitted. In fact, it is the next-to-last recognition discussed by Aristotle. In translation “the recognitions invented by the poet himself”, some other word can be used, as Aristotle here has in mind that poets usually write poorly and use trite recognitions. A phrase “to contrive” (in Lithuanian “sukurpti”) could be used here instead, as it means “to make or put together roughly or hastily”. It is also true speaking of the translation that a character of the play rather than the audience recognises another character by false reasoning. Finally, the author of the article draws a conclusion that according to Aristotle an anagnorisis is the recognition of persons occurring among characters of the play. In Aristotle’s Poetics, six variants of anagnorisis are distinguished and their classification made based on the principle of artistry and the originality of its use in plays.