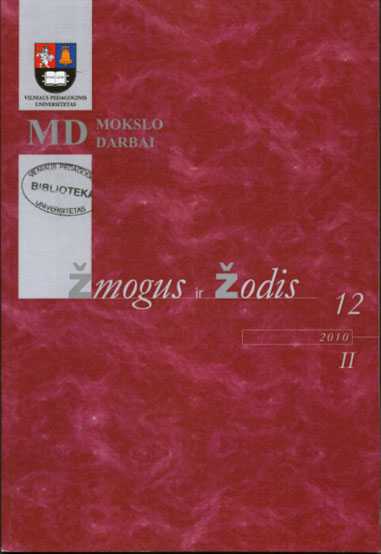 Summary/Abstract: It is emphasized in the history of Lithuanian literature that creation of Maldonis (1929–2007) is strongly based on the traditions of agrarian culture. The article analyzes the poems of Maldonis of the town topics with the aim to show that a city, and namely Vilnius, where the poet has lived for about sixty years, was not less important for him than rural culture. The object of the research: both printed and remaining in an archive, usually unfinished works. Townscape could be already found in the creation of Maldonis since his first collections in which a city is bright and favorable to a person. The poetry of Maldonis reflects the dwelling of the newcomers in Vilnius, multinational culture of this city. The poet finds important not the signs of old architecture or history of old ages although there are some in his poems as well, but the experiences of a person of the 20th age; usually not architectural but nature’s views dominate in the poems. There is quite an essential difference between the manuscripts and printed texts or their variants of the Soviet times. A more dramatic reflection of the Soviet times and World War II remains in the archive. The poems of the last decades were full of irony and sarcasm which were devoted both to the Soviet times and the Post Soviet period the poet lived in.