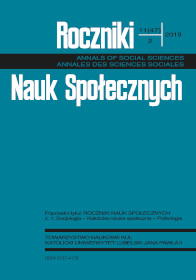 Summary/Abstract: The main aim of this article is, by using the case of digital vigilantism, to analyze what new challenges could occur in the E-society and how understanding of the self and self-act is changing during the process when more and more new technologies are integrated in people’s everyday life. The swarm is a metaphor which Zygmunt Bauman uses to show how the understanding of communities is changed in liquid modernity. Swarms are based on untied, uncontrolled, short-term relationships between consumers/users to achieve some goals. Swarms could be massive in numbers and have a lot of power for a very short period. One of the examples could be digital vigilantism, which is an act of punishing certain citizens (they are believed to deserve punishment) by other Internet users. One example of DV would be to put personal information on display to spread shaming acts. The problem is that people are interested in some actions for a very short time, but the political act/change requires an active and stable effort. Despite the phenomenon of DV not getting much attention from the field of political science or political philosophy, it provides us with some insights about the current changes in our understanding of politics and the concept of what is “political” as well as inviting us to reconsider the idea of swarms as put forward by Bauman.