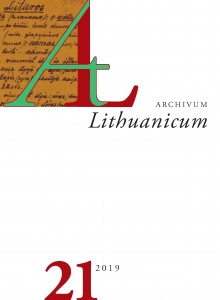 Summary/Abstract: This article attempts to verify the historically set axioms associated with the lengthening of vowels in word endings and its origin that are still popular in the normative tradition of Lithuanian linguistics; first of all, it posits that language contact affects the duration of vowels of Lithuanian mother tongue speakers in Vilnius and that lengthening of vowels thus originates from Russian and Polish. The article compares the pronunciation of three groups of Vilnius residents: 1) Lithuanian (those who grew up in Lithuanian-speaking families), 2) bilingual (those who grew up in a family where only one of the parents was Lithuanian and both Lithuanian and Russian / Polish or another Slavic language were used) and 3) native Russian and Polish speakers. The formulated hypothesis is that if longer endings occur in the speech of native Lithuanian speakers because of the influence of Slavic languages, those respondents who grew up in bilingual families and spoke Lithuanian and Russian or Polish at home would produce a longer /i/ and /u/ than native Lithuanian speakers from monolingual Lithuanian families. After comparative analysis of the stressed vowel duration in endings produced by respondents of different ethnic and linguistic backgrounds, it became evident that language contact was not the reason why native Lithuanian speakers produce not only short, but also long vowel variants in word endings.