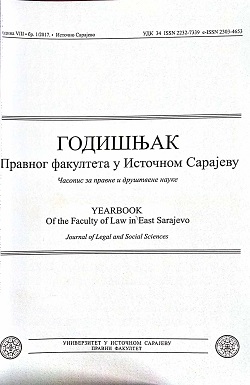 Summary/Abstract: During the decision-making procedure the Constitutional Court shall examine the existence of only those violations that are alleged in the re- quest/appeal. The court or the body whose decision has been quashed is obligated to make another decision and, in doing so, it shall be bound by the legal opinion of the Constitutional Court concerning the violation of the appellant’s rights and freedoms guaranteed under the Constitution. The decisions of the Constitutional Court shall be final and binding. Every physical and legal person shall be obligated to comply with them. In the analyzed case AP 369/10, the Cantonal Court in Bihać, whose Decision was terminated, adopted a new act in accordance with the legal opinion of the Constitutional Court. Also, the Parliament of the Federation of B&H adopted the Amendments to the Family Law of the FB&H, and disputed Article 43 was out of the legal force. As for the legal effect of the Constitutional Court's decision against other state bodies whose decisions were not subject to challenge before Constitutional Court, we consider that it is not formally binding on the National Assembly of Republic of Srpska. In other words, it does not imply any commitment neither for this entity's legislative authority, nor for the legislative body of the Brčko District. However, the lack of identical normative solutions in family-law relations across the entire territory of B&H leads to legal uncertainty of the subjects and their discrimination depending on the part of the state in which they live. In addition to that, in the territory of Republic of Srpska, the applicable provisions of the RS Family Law are still gender-based discriminatory. In this regard, given that Bosnia and Herzegovina is a democratic state and that both entities are obliged to ensure the highest level of internationally recognized human rights and fundamental freedoms, on the one hand, and bearing in mind the fact that the rights and freedoms envisaged in the European Convention and its protocols directly apply in Bosnia and Herzegovina and have priority over all other laws, we believe that regular courts in the RS, when deciding on the claims, have a constitutional obligation to apply international standards for the protection of human rights and freedoms. In other words, courts in Republic of Srpska should take into account the views of the Constitutional Court of B&H in case AP 369/10. The reason for this lies in the fact that the analyzed Decision has a prejudicial effect as it represents a source of law. The Decision of the Constitutional Court of B&H in the case AP 369/10 represents the relevant legal basis for the possible initiation of new proceedings before ordinary courts in Bosnia and Herzegovina.