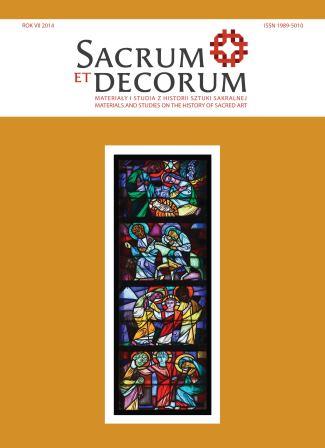 Summary/Abstract: Jerzy Nowosielski (1923–2011) was one of the most outstanding Polish painters of the 20th century. His oeuvre also includes many projects in the field of monumental religious art. Born to an Orthodox family in the Ukraine, he is the author of an original concept of the modern icon, which combines the esthetics of modern painting with Byzantine tradition. He has designed paintings for private devotion, as well as for churches of different denominations. In Wrocław, he has worked with both Eastern Orthodox and Greek Catholic churches. For the Eastern Orthodox Cathedral of the Nativity of the Mother of God (the former Church of St Barbara), he designed the Feast tier of the iconostas and a polychrome decoration, only parts of which were actually painted in the end: in the vaulting of the presbytery and the chapel of the Exaltation of the Cross. His plans for the other Eastern Orthodox church in Wrocław, the Polish-language Church of St Cyril and St Methodius in Piasek, unfortunately never materialized, even though all the designs, e.g. for the iconostas and the Golgotha, were ready. Nowosielski’s cooperation with the Greek Catholic was more fruitful; however, the uncertain legal status of the Greek Catholic Church in Poland also proved a hindrance to the projects. In the crypt of St Bartholomew (the lower church of the Exaltation of the Cross), the original Greek Catholic church in Wrocław, Nowosielski designed polychrome elements and stained-glass windows, ten of which were actually produced. He also made many moveable elements for the interior (the iconostas, banners, liturgical equipment, icons), which were transferred to the new church, the Church of St Vincent and St James, in 1999. Even though it was rooted in deep faith and rich spiritual experience, Nowosielski’s bold and original religious art often sparked controversies among the common people, hence its checkered fate, frequent problems with producing the designs, as well as acts of aggression and destruction against them. Today, there is no doubt that Jerzy Nowosielski has created outstanding masterpieces in the field of monumental religious art; their every trace, circumstances of creation, and history deserve scholarly attention.