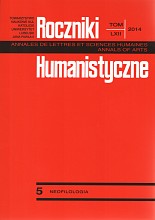 Summary/Abstract: The article discusses Miguel de Unamuno’s concept of intrahistoria and its influence on the narrative structures of La llama (The Clash), the third volume of Barea’s autobiographical trilogy entitled La forja de un rebelde (The Forging of a Rebel). The Clash offers a detailed picture of civilians’ life during the Siege of Madrid that took place during the Spanish Civil War of 1936. The book is based on the author’s memoirs and the accounts provided by people Barea met when the city was surrounded by the troops under General Franco. Historical and intrahistorical narration enables the author to portray the fratricidal conflict in a very detailed and convincing way. Barea focuses on the everyday life of the nation involved in the so-called “great history,” depicts the fates of anonymous individuals, their emotions and personal tragedies and in this way he debunks the idealized image of war. The form employed to present the painful experiences of the twentieth-century Spain pertains to the latest trends in the studies on the past.