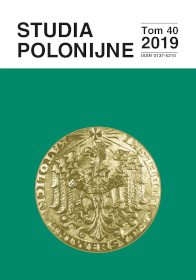 Summary/Abstract: The history of Poles originating from Manchuria who participated in the 1939 Defensive War, and in the combat operations of the Independent Carpathian Rifle Brigade, as well as other units of the Polish Armed Forces in the West, is not only a glorious card in the history of Polish diaspora in Manchuria, but it also marks strength of the Polish Army and a nation which was forced to fight for its survival in particularly difficult conditions of World War II. The heroic attitude of many Poles from Manchuria fighting in the Polish Army is all the more remarkable that some of them knew Poland only from the stories told them by their parents or teachers, however after its fall in 1939 they were ready to fight for its liberation.