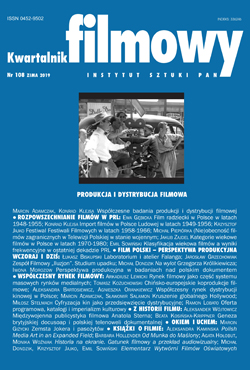 Summary/Abstract: The film distributor is a very important figure in the life cycle of a film. It is the distributor who engages his own resources in the dissemination and promotion of the film and, together with the producer, decides when the film should hit the cinemas, how the marketing campaign will be conducted and who it will be addressed to. Since the cinema distribution market in Poland is still underexamined by academic researchers, the purpose of this article is to fill this gap and familiarize readers with the specifics of the Polish cinema distribution industry. Because the results of the research carried out by the authors on the functioning of the cinema distribution market in Poland in 2002-2018 provide empirical evidence that the Polish film industry is strongly influenced by large American distribution companies, the article also describes the impact of the modern Hollywood industry on the local film industry.