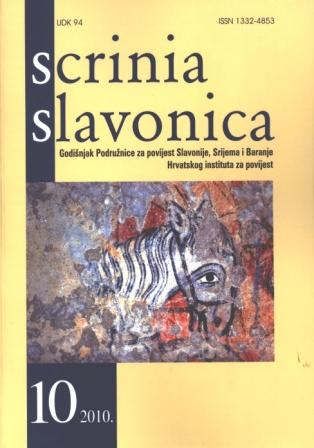 Summary/Abstract: This study analyses the strategic importance of Osijek (Eszék) in the years before the battle of Mohács. The premise that the Hungarian army should have waited at Osijek, on the right bank of the Drava, and hindered the Ottoman troops from crossing the river, recurs constantly in scholarly works about the 1526 campaign of Suleyman the Great. These works accept the fact that a late medieval castle defended the ford at Osijek, and these authors strongly condemn Hungarian military leadership for not stopping the Ottoman army there, on the banks of the Drava. This question is not very exciting in the abstract, and is rather expected to be dealt with in a study on local history. However, during the Ottoman domination Osijek indeed played a key role in the invaders’ military strategy, which explains the detailed investigation of the issue. The outstanding importance of the town was the result of its location: the fast-flowing and dangerous River Drava narrowed here, which enabled large armies to cross it. Thus, the invaders built a permanent bridge at Osijek in 1529, and they did their utmost to defend it from their enemy. The fortified castle was also meant to prevent plundering troops from an attack. The stronghold helped the conquerors to collect taxes from the inhabitants of the region, and to defend the bridge until as late as Nikola Zrinski’s (Miklós Zrínyi’s) famous winter campaign of 1664. Due to the strong military presence, the town began to prosper and in the 16th-17th centuries it became a commercial and cultural centre of the region. In all probability, there had been a castle in Osijek at the end of the Middle Ages, but it did not exist during the campaign of 1526 or it did not have any military importance. However, its memory survived and its destruction became connected to the burning up of the town in that year. Some of the medieval walls might have survived because the inhabitants in the 17th century thought their stones were reused during the Ottoman building works (according to the famous Turkish world traveller, Evliya Chelebi).