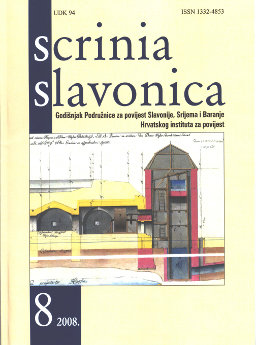 Summary/Abstract: The premise of this contribution considers the 16th and 17th centuries as one of the peaks of the religiousness of society. This strong religiousness was the reason for the success of the Reformation and of the Baroque reform. It was also true for Slavonia, Srijem (Szerémség) and South Transdanubia, where this process was further coloured by the appearance of the Islam and the immigration of a significant number of Orthodox Christians. The Islamic-Orthodox-Catholic-Protestant co-existence was basically peaceful and since this region was located on the border of each religion’s main areas, the church structures were weak. Thus, none of them could extend their influence over the others, but they enriched one another, and a specific religious syncretism flourished in the region during the Ottoman era up to the 18th century. The Ottoman conquest dismantled medieval state and church organisations and offered a wider range of possibilities for the people to live their personal religiousness. The conquerors did not interfere in the religious debates of different congregations and they were much more tolerant towards other religions than they were in the Balkan Peninsula. More and more missionaries appeared in the region due to the Catholic world mission started as a result of the regulations of the Council of Trent. These missionaries sent regular reports to their superiors, thus revealing the religious traditions of the local inhabitants. These reports enable historians to investigate the roots of popular religiousness flourishing in the period. These data clearly indicate that the modus vivendi among different religions which is observed in Bosnia also came into existence in South Transdanubia in everyday life. Popular religiousness forming the basis of the system of beliefs had a significant role in it. Therefore a specific popular religiousness can be traced within different congregations that went back to pre-Christian times, but also became the basis of the Catholic revival in the 17th century.