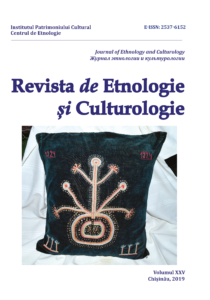 Summary/Abstract: The bride’s chastity is one of the essential feature of the archaic mentality preserved in the traditional society of the Bessarabian area, until the middle of the XX century. That value guaranteed the continuity of the kin, the prosperity of the future family, good succession of patrimony and, last but not least, the transmission of moral values at family and community level. This study analyses the sensibilities, collective representations and behaviour patterns reflected in the wedding customs of Bessarabia area at the end of the XIX – the middle of the XX century, referring to the chastity of the bride; the presentation of the ritual context and the punitive mechanisms practiced in the wedding tradition in the case of “wrong” brides; the evolution in time of morals and collective representations regarding the bride’s chastity in relation to the affirmation of the economic and moral status of the woman. The research is based on ethnographic manuscripts from the archive funds of the Republic of Moldova, Romania and Ukraine.