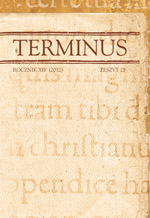 Summary/Abstract: In 1628, pupils and professors of Jesuits college in Rawa Mazowiecka presented to a bride and groom a poem called “Sphinx Samsonica…” - a unique book, full of allusions and references to the emblem of classical antiquity. The poem was created during the thriving baroque period which relished in abundance and variety. It was the perfect time to publish works which had bountiful contents which were as diverse and hybrid as “Sphinx Samsonica…”.The poem, in the fabric of which a few literary genres coexist, is a perfect example of an erudite Jesuit rhetoric full of parallels and with clear citations of many ancient writers. Thus showing that one of the main pillars of the poem is the theme of antiquity. The second pillar is its emblematic character as the multiple layers of this work are visible not only in the verbal area, but also in the pictorial. The emblems are one of the innovative tendencies of this work, tendencies which had just started to appear on the pages of printed panegyrics and which would become a part of panegyric literature in the 17th century. “Sphinx Samsonica…” is original in this area not only because of the presence of emblems in the poem, but also because of the “baroque”, ornamental construction of the work in which words and pictures are woven together in a unique way. Although Sphinx Samsonica… figured in many listings and was also mentioned in the bibliography of emblematic printouts written by Paulina Buchwald-Pelcowa, presenting basic information about this work, it has gone unnoticed for a long time. It is not mentioned in monographs devoted to modern epithalamiums, and it was marginally mentioned in monographs devoted to emblems. The dust of oblivion was finally wiped by Jadwiga Bednarska, who discovered the dormant potential of the pages of the Jesuits work in the first part of her book about Polish panegyric illustrations. In the second part, she considers the relationship of this work with Dutch emblems. Therefore, the work has been thoroughly researched from the point of view of the history of art. However, meticulous attention has not been lavished upon it, both from the philological point of view and also regarding the correlation between words and pictures. No research has been undertaken regarding its genre diversity and the work has been neither published, nor translated from Latin into Polish. However, the philological level is also important because it allows the research and discovery of what is hidden inside Latin comments and epigrams full of allusions to antiquity. This knowledge allows an explanation to the exact sense and meaning of the emblems, which very often are not clear and understandable at first sight. As a result, this article makes an attempt to enlighten the reader of the philological level of this work, and the foundation of the article is a presentation of the opulence of antique allusions which regularly appear in the whole text in a chosen fragment of “Sphinx Samsonica…” . Emphasis is