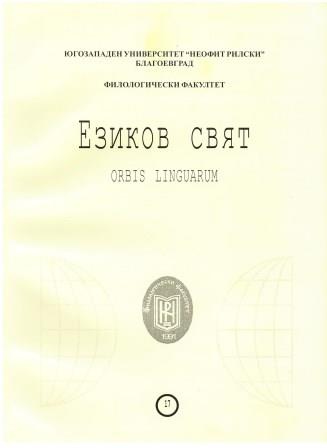 Summary/Abstract: This report is based on research of the dramaturgical, theatrical and critical work of P. K. Yavorov which has certainly broadened the real boundaries of his cultural and historic heritage that he left to Bulgaria, Europe and the world. The survey is based on elaborating a theatrical chronicle of each day of Yavorov’s life, as well as reading of protocols of the National Theatre in Sofia written by Yavorov himself. In 1908 Yavorov became an artistic secretary, director and translator at the National Theatre. After 1910 he dedicated himself to dramaturgy and wrote his drama masterpieces At the Foot of the Vitosha Mountain and When Thunder Strikes How the Echo Fades Away. The scientific analysis of his works and the documents has expanded the volume of Yavorov’s heritage, outlining his more valuable contribution to the new Bulgarian culture and adding to Yavorov’s eternal poetic heritage his contribution as a theatrical worker – a playwright, director, translator, theatre critic as well. Thus, Yavorov appeared as a builder of the important cultural institution in Bulgaria after the Liberation – the National Theatre. This research is a convincing evidence of his cultural and historic heritage and contribution not only to Bulgaria and its culture but to the European and world ones