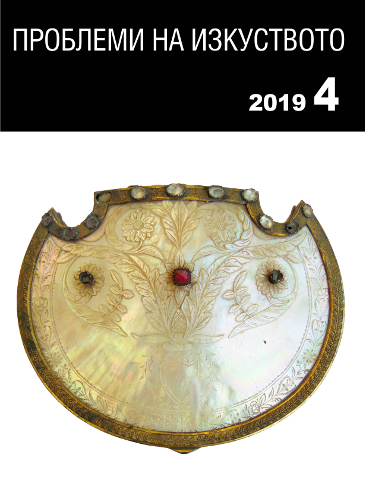 Summary/Abstract: Following the latest restoration works of the nineteenth-century murals at the Church of St Michael the Archangel in the town of Rila, we can now to a great extent reconstruct the conceptual approach taken by the commissioners and icon-painters to the decoration of the southwest area of the naos, formed by three arches and the party wall on the west. Michael the Archangel is depicted on the vault, surrounded by four scenes from the Archangelic Cycle in the four lunettes, to which three more are added on the extrados. Some of the scenes have apparently been inspired by an earlier icon of the archangelic miracles from the same church. Most of them show ingenious interpretations. In the representations of the prophets, of special interest are the inscriptions on their scrolls, two of which are mirror-reversed. Some of them relate to the Most Holy Mother of God, whose frescoed icon has been painted on the west side of the arch which is to the east of the newly built narthex; above it is Gabriel the Archangel from the Annunciation, and St Nicholas is depicted in the niche. We could hypothetically reconstruct the earliest decoration of the southwest area of the naos that collapsed after an earthquake in 1928: Christ Pantocrator, Theotokos from the Annunciation; John the Baptist was in the niche. The entire decoration has been adapted to the funerary character of the west areas of the cemetery church, testifying to the high theological literacy of the commissioners. Stylistically, parallels of this painting are found in two opposite directions. A similar type of stylisation and painting techniques are discernible in the mural monuments in the precinct of Rila Monastery, dated to the 1790s, as well as in works by Samokovian painter Kostadin Petrovich Valiov of the 1830s. The name of icon-painter Fillip can also be associated with this church: his is the Christ the Great Hierarch icon on the cathedra, now in the Parish Church of St Nicholas in the town of Rila. He possibly painted also parts of the iconostasis. His manner of the period shows, very much like that of Kostadin Valiov, the same influences of icons and murals by the Athonite monks who, in the late eighteenth century, worked at the Rila Monastery churches and chapels. Highly debatable is the participation of proto-master builder Alexi Rilets in the repairs and the refurbishing of the Church of St Michael the Archangel. On a metal nameplate attached onto the backrest of the cathedra he has defined himself as a ‘donor and applied artist’. In all likelihood he was the one who paid for making the iconostasis and his nameplate has initially been attached to the iconostasis and moved to the surviving cathedra in the wake of the earthquake.