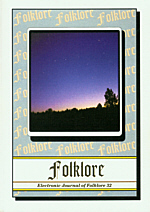 Summary/Abstract: The traditional chronology of Besermians is a constantly developing and transforming system subject to various internal and external influences. As a part of a culture’s worldview, time determines the rhythm of nature, lore culture, economic activities, and cycles of human life. A day covers the period from sunrise to sunset, a night the period from sunset to sunrise. Each part of the day was given a name. Midnight and noon were considered dangerous and special times. Weekdays were seen as positive (easy) or negative (difficult). The positive or negative nature of the day may have influenced the outcome of the work undertaken. The yearly system was based on the change of seasons. The change of seasons had a significant influence on the entire economic life, which, in turn, determined the community life, including family and practical rituals. Until the adoption of mechanical clocks, time has been calculated with various means at people’s disposal. Observing the movement of the sun and the moon has been important. The Besermians havemerged several traditional feast days, the tradition of commemorating the dead and other festivities with the Orthodox church calendar.