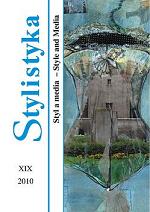 Summary/Abstract: The paper deals with the presence of verbonominal analytical constructions on Polish TV at the beginning of the 21st century. It is a continuation of the research on such constructions carried out in the 70ies of the 20th century and at the turn of the century. The author deals with verbal analytical constructions on Polish TV. To create a contrast, she gives examples of collocation in poetry. The author proves that analitisms are used on TV in the following functions: 1) retarding (slowing down speech pace), 2) imitating (use of clichés), 3) demonstrative (image creation), 4) metalinguistic (conscious selection of collocations instead of verbs) and for 5) stylisation and 6) euphemisation of speech. The conducted research proved that analitisms are used both by TV programme hosts and their invited speakers. It also occurred that the frequency of analitisms on TV is another specific function of the TV language. Earlier, it was proved that TV language is predominantly colloquial.