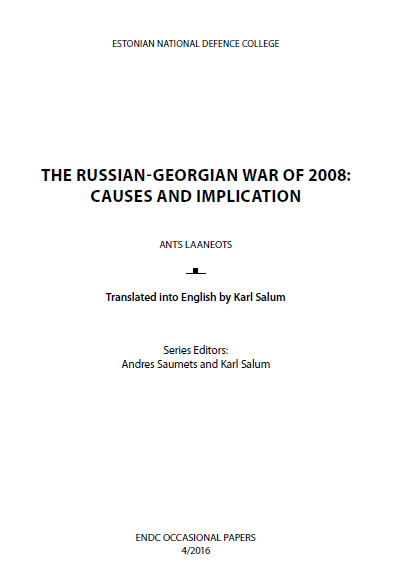 Summary/Abstract: In the summer of 2013, five years had passed since the occurance of the last large-scale armed conflict in the post-Soviet space when the Russian Federation, as the legal successor of the Soviet Union, attacked the Republic of Georgia. This conflict is considered to be a continuation of the Russian military operations in the Caucasus region that began in December of 1994 with the outbreak of the war in Chechnya. For Russia, the purpose of these operations was to quell independence movements and restore its supremacy in this strategically important region. The Southern Caucasus has historically been a transit corridor for goods and people that connects Asia and Europe. For centuries, the region has also been a hotspot for the clashing geopolitical interests of three major regional powers: Russia, Turkey and Persia (modern Iran). People living in what is presently the territory of Georgia have witnessed and experienced the oppression of Russian, Turkish and Persian conquerors. As the only two Christian nations in the region Georgia and Armenia suffered especially under Muslim oppression. Many Russian historians claim that the extreme violence of the Persians, who invaded Georgia in 1795, compelled the local Czar Georgi XII to appeal to the Russian Czar Pavel I to allow Georgia to join the Russian Empire. Pavel I signed the decree on December 22nd, 18002. Under the command of General Lazarev, the Russian forces liberated Georgia from the Persians and it became a part of the Russian Empire.