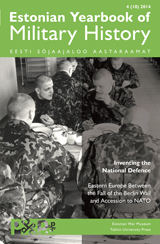 Summary/Abstract: The domineering opinion during the Cold War, especially in the domestic and foreign propaganda of the Soviet Union, was that Hitler started World War II by attacking Poland and that Germany’s attack against the USSR in summer 1941 was nothing but deceitful aggression against the peace-loving socialist nation. Although the pact made between the Soviet Union and Germany on the 23rd of August 1939 was not denied in the Soviet Union (what was denied, however, was the existence of its secret protocol), it was presented as an attempt by the Soviet Union to buy time and avoid war. The attack against Poland in 1939 was treated as reunification of the Western-Ukrainian and Belarusian nations with their compatriots.What really happened was that eastern Polish territories, which had been placed under the influence of the Soviet Union with the secret protocols to the Molotov-Ribbentrop Pact, were seized as a result of the military attack launched by the Red Army on the 17th of September 1939. Conquering the Baltic States and Bessarabia in summer 1940 was presented as domestic socialist revolutions. These countries had also been placed under the influence of the Soviet Union with the secret protocols of the same pact. The Soviet Union forced the Baltic States to surrender and Romania to give up Bessarabia by threatening military action. The Baltic States were then occupied with the support of the weapons of the Red Army and the Baltic Navy and incorporated into the Soviet Union.The archive documents that became accessible after the collapse of the Soviet Union have helped to prove that specific plans for a preventive attack against Germany had been prepared by spring 1941. One of the reasons for the massive losses suffered by the Red Army in 1941 was the fact that Germany managed to hit it with its attack before the Red Army had completed its preparations for attack.