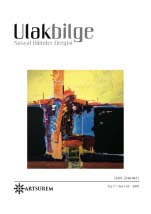 Summary/Abstract: In this research, emerging in Turkey after 1980; art works reflecting the new social structure shaped as a result of political, economic and socio-cultural changes are discussed. After 1980 both in Turkey and in the world, the effects are felt in many areas there has been movement of change. These changes resulted in the transformation of the social space into a new structure due to the multidimensional factors involved, and the art space gained a new interpretation both in content and form. Especially after 1980, economic policy implemented had many effects. These effects; it has become visible with society giving up traditional culture but not understanding modern culture, migrating to cities and acquiring a different perception of consumption. This change not only moved to the visual arts as a subject and a form of creation, but also led the art market to channel in a different direction. The works of Nur Koçak, Erdağ Aksel and Gülsün Karamustafa, who carry the changes in daily life habits and cultural values of the society to their works, have been examined in the context of social change and new values.