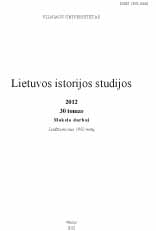 Summary/Abstract: The present article is a variation of the theme started to be considered in 2006 and encouraged by a catalogue of an exhibition of the new Museum of Polish History, which published one of the variants of the text in the summer of 2012, and another text, reconstructed on the basis of this text and accompanied by the introductory word by Adam Michnik himself, the legend of Solidarity,and published in the newspaper Gazeta Wyborcza. On the eve of the new millennium – on 31 December 1999 – the editor of the Parisian magazine Cultur, Jerzy Giedroyc stated in one of his last interviews that Poland was still ruled by two “coffins’ (“dwie trumny”) – those of Roman Dmowski and Józef Piłsudski. Today, we can add that the Lithuanian collective memory and historical consciousness are still ruled by one “coffin” – that of Antanas Smetona. The article considers in what way these “coffins” or “ghosts” have determined the conscious and subconscious clichés of assessing the past, which we called “amnesias”. Basing ourselves on the history of assessments of the Constitution of 3 May 1791 supplemented on 20 October, we state the following about the most significant oblivions: in the prevailing Polish historical narrative, this is the oblivion of the Grand Duchy of Lithuania as a union, as a marriage partner and treating it not as a historical subject but as a space of the Polish civilisation mission, and in the Lithuanian historical narrative it is the “oversleeping” or oblivion of the history of the late Grand Duchy of Lithuania with the Baroque epoch, Vilnius university and the constitution of 1791. Czesław Miłosz’s and Tomas Venclova’s dialogues about Vilnius started overcoming these amnesias, and further historians had to find historiographic dialogic conceptions concerning the subjectiveness of the Grand Duchy of Lithuania (in Polish historiography – Juliusz Bardach) and the Eurocivilisation role of Poland in the history of the GDL (in Lithuanian historiography – Edvardas Gudavičiaus), as well as the discovery of the “old Lithuanians” as the perspective of historical reality and historical conscience (in Polish historiography – Henryk Wisner, Krzystof Buchowski; in Lithuanian historiography – Rimantas Miknys, Ryszard Gaidis and others). All these facts were crowned by the discovery and actualisation of Jerzy Giedroyc himself and the ULB (Ukraine, Lithuania, Belarus) conception created by him and Juliusz Mieroszewski.