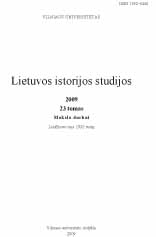 Summary/Abstract: Let us hope that the almost thirty member states of the European Union have been aware of Lithuania as a member of the EU and NATO since 2004. Lithuania is an ordinary small country with its capital in Vilnius, the easternmost capital of all EU states. A walk through the city at first glance will reveal nothing extraordinary: an ordinary city in the post-communist sphere, with Stalinist symbols and Soviet architecture, which is now defined as the “aesthetics of boredom”, next to Baroque church towers. On the other hand, it seems that the world knows about the confrontation between Georgia and Russia and other tensions in Eastern Europe: the fate of democracy in Belarus, the issue of Transnistria in Moldova, the Orange Revolution in Ukraine, and the problem of gas supplies to the West. This is the reality of the post-communist sphere, the legacy of breaking out of the Communist empire.