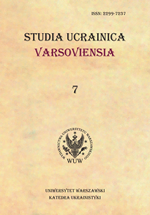 Summary/Abstract: The article is devoted to the study of value systems which determine the sacred dimensionof the socio-cultural experience of the people. Sacramental is considered not in thereligious context, but as the highest value that lies outside the understanding. Sacramentalis an indicator of the state of culture. The change in the social environment, ideologicalorientations (which is inherent to immigrants at one time or another) causes a change insacred values. It is proved that, having fallen into an inocultural environment, a person strives topreserve their national identity, which helps to get „rooted” in the new place. It also providespreserving their unique image in the alien socio-cultural environment and guaranteesa sense of security, stability, cultural uprooting. In the works of Canadian authors ofUkrainian origin, the sacred space of the individual’s personal existence is determined bythe higher spiritual values created by his own people; and hence – is formed due to thesensation of religious representations, the fatherland’s land of Ukraine, the native language,elements of national culture and history, common national myths, historical memory.