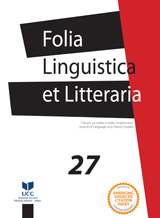 Summary/Abstract: While insulting opponents is not something alien to politicians and political campaigns, Donald Trump has added a new dimension to it by making it almost a part of his daily routine. Moreover, his insults are often blatant and outright, rather than subtle and disguised, which sets a new tone to political discourse. The goal of this paper is to establish whether his insults are random rants meant to vent his anger and frustration with his critics and political adversaries, or rather a part of a calculated strategy aimed at political gain. The results of the quantitative and qualitative analysis of the corpus, which consists of 915 tweets published by Trump over a four-month period, and which was done within the methodological framework of the speech act theory and, in part, cognitive linguistics, show that Trump’s insults are not based on impulsivity and randomness. The results also suggest that, based on the way the illocutionary effect of insulting is achieved, his insults are realized in three distinct patterns: derogatory nicknaming, conventional and indirect insults. The recurring framing of political opponents by means of derogatory nickname-calling, by far the most common type of insults identified in this study, reveals a higher-level agenda on the addressor’s side.