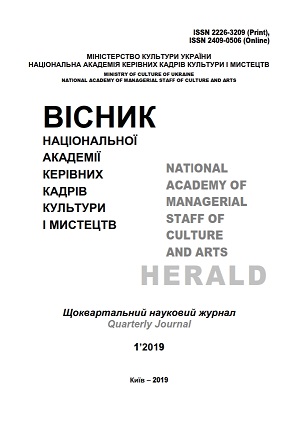 Summary/Abstract: Purpose of the study. The purpose of the proposed article is to clarify the essence of "language-culture" dichotomy, outlining the specificity of the interconnection and the interaction of its components in the projection to the mentality of the reception of national constants. Methodology of the study. The methodology of the research is based on the ideas of anthropocentricity (V. von Humboldt, O. Potebnya, E. Sepir, B. Whorf, M. Heidegger, etc.) and the main provisions of linguocultural studies, which confirm the necessity of studying language and culture as a space of interiorization and exteriorization of mental representations of linguistic and cultural knowledge (L. Wittgenstein, S. Yermolenko, V. Labov, V. Uzhchenko, H. Yavorska, etc.). The cultural-semiotic method, the method of synchronous sections and the systematic approach have formed the basis of the research strategy. The scientific novelty. "Culturelanguage" dichotomy plays a leading role in shaping the mental sphere of the ethnic consciousness and defines and shapes the specifics of the national worldview. It has been confirmed that the most active verbal symbolization as a factor of national-cultural selfidentification manifests itself in the spheres of semasiology and onomasiology. But the peculiarities of implementation at the syntactic level in the superficial structure of the semantic components of the deep structures of the sentence are the inherent features of the syntax of the national language, which constructs the human mentality and, in part, its cultural self-consciousness. It has been observed that the processes of cultural uplift, national revival, development of the Ukrainian literary language are interdependent and mutually conditioned. Conclusions. Thus, the "culture - language" dichotomy appears as two similarly organized sign systems that function equally, are fundamentally related. An important factor in the formation of ethnic culture is the language that captures, preserves and translates the ways of categorizing and conceptualizing the world and the internal reflexive experience of the people. The linguistic consciousness of the people appears as a form of its cultural expression, of civilization, in the conditions of world globalization, and the phenomenon of language is the identification code of the ethnic consciousness, of the mentality and specificity of the national world perception.