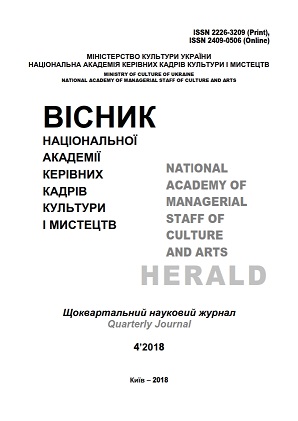 Summary/Abstract: The purpose of the study. This paper aims at exploring myth as a phenomenon of culture. Methodology of the study. The authors have used anthropological integrative approach, semiotic method of representing myth as a language of culture, as well as phenomenological method. The scientific novelty. Myths provide meaning and purpose to all elements of culture. Myth underlies cultural reality – it is a core of culture. If we imagine culture as an onion comprised of different layers (the “onion” model of culture), then myth is the center of it – it is a core beyond articulation. It generates our beliefs and assumptions that are rarely explicated, however these beliefs and assumptions shape both the structure of personality and culture. They are taken for granted, but support any culture. They manifest themselves in an explicit form in values, purposes, goals, strategies and philosophies, which motivate us and shape our reality. Conclusions. Mythology is one of the ways to comprehend and interpret the world around us. Its basic concepts are the “world” and “human”. Through the lens of these concepts, people realized their destiny in the world and formed life attitudes during the early stages of human development. Giving place to philosophy and science, mythology has not lost its important place in human history. Mythological narratives were borrowed by many religions. In recent decades, representatives of literature and art have intentionally used myths to express their ideas. They have not only rethought ancient myths, but have created new mythological symbols. Nowadays, an interest in myths and mythologies has dramatically increased, and it is not by chance. The famous researchers of the primitive cultures and mythologies as the ways of mastering and interpreting the world have demonstrated the creative power and heuristic potential of myths that will be manifested in the future.