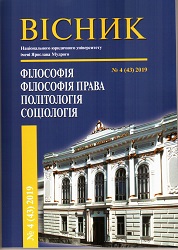 Summary/Abstract: Formulation of the problem. The urgency of a comprehensive study of the institute of political parties is conditioned by several illustrative circumstances. The past election campaign in the Ukrainian parliament in 2019 was marked by the fact that it was held under the old “rules of the game.” It is known that the parliamentary election campaigns of1998, 2002, 2007, 2012 also used a mixed system of elections, in which 50% of parliamentarians were elected in majority constituencies and 50% of people ’s deputies were elected on a proportional basis for party lists. According to the current rules of elections to the Verkhovna Rada of Ukraine, candidates for the People’s Deputies will be nominated by a political party, which were registered in accordance with the established procedure no later than one year before the elections. Despite the fact that the institute of self-nomination of candidates for the People’s Deputies remains, political parties have become the main political players, the only active actors in the electoral process of Ukraine and have received a strong impetus for their development.The purpose of this article is to reveal the history of political party formation in order to gain a better understanding of the essential nature of these important political entities and to identify promising moments in the development of parties in Ukraine.Analysis of recent research and publications. In the world and Ukrainian partology, it should be noted that well-known foreign experts J. Sartori, M. Duverge, A. Leiphart, S. Avineri, G. Almond, E. Wind, S. Lipset, S. Rokkan, S. Neumann in characterization the current state and prospects of the development of parties as political institutions indicate a direct connection and mutual influence between the party and electoral systems. Particular attention of domestic partologists M. Primus, N. Goncharuk, A. Pakharev, I. Kre-sina, O. Erzhov, V. Lytvyn, G. Malkin, Y. Shvedy focuses on the problem of the influence of the electoral process on the formation of the party system in Ukraine. Recently, in connection with the growing role of parties in the political life of our country, studies of new aspects of their activity have appeared: L. Gonyukova considers political parties as an institute of state policy and governance, O. Sakiri concentrates attention on the principles of constructing the image of a political party, O. Nikogosyan considers the peculiarities of the development of political parties and party systems in the post-communist space, A. Tetyanich explores the constitutional and legal principles of state control over the activities of political parties, etc.The article deals with the history of the formation and development of political parties as socio-political institutions, from the time of antiquity to the emergence of mass parties in the second half of the nineteenth century. The latest trends in the evolution of the institution of political parties as subjects of democratic politics in polyarchy systems are analyzed. It is noted that political parties have become the main political players, the only active actors in the electoral process of Ukraine and have received a strong impetus for their development. Modern political parties emerge as institutions of democratic politics, they “grow” from the bottom, are created by politically active citizens for the protection of their own interests, and therefore represent first and foremost an important segment of civil society, which unites it with public authorities. For a long time, the division of the parties into the left was adopted (the Communists, the Social Democrats were referred to here), the centrists (those who tried to defend the interests of the majority), the right (who stood for an elitist understanding of politics). However, as most political parties shifted to the middle class in the 20th century, only two of them became right-wing: center-right and center-left. At the same time, the ranking scale itself remained the same. At the end of the twentieth century. significant changes occurred in the political sphere of society. Political parties began to lose their traditional class character and appeal not so much to certain social strata as to all groups of the population. American political scientist J. Lapalambara called this type of political party a “grab all party” and then a “voter party”. This trend is also confirmed in modern Ukraine (Party of Servants). Parties have stopped offering ways to develop society, politicians are only interested in voter votes, not ideological issues.It is concluded that modern Ukrainian parties need to go a long way in their development to meet all the criteria of a democratic political party. Ukrainian parties must undergo a transformation from political additions of oligarchic holdings to truly mass popular structures based on the principle of modernization, and then there will be a significant increase in real support.A promising direction for further research is to consider the organizational foundations of the functioning of political parties in polyarchies and under hybrid political regimes.Remarks are made about the prospects of party building in contemporary Ukraine.