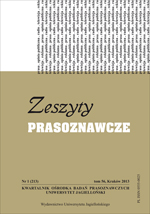 Summary/Abstract: The “text – reality” relation in the process of creating media reality was studied on the basis of the linguistic material excerpted from the press. The ways of profi ling events and evaluating participants of these events made the object of our research. The textual profi ling of the ‘Odyssey Dawn’ operation, by chosen Polish and American dailies, was discussed. Gazeta Wyborcza presented not only the role of the USA as a coalition leader, but also stressed the important role of France and Britain in the operation, additionally offering the Arab point of view. Rzeczpospolita presented a large number of negative opinions of the opponents of the operation. The Washington Post showed a considerable interest in the role of the USA in the conflict and also in the reaction of the Arab world. On that basis, a polarization of participants emerged: the West world vs. the Arab world. In the Washington Times the main emphasis was put on the American viewpoint, and the standpoints of other coalition members appeared to be of marginal importance. The quantitative axiological analysis of the participants of the event showed that the evaluating opinions were negative in majority. Conservative dailies focus on the negative aspects of participants whereas the liberal ones counterbalance them with positive opinions.