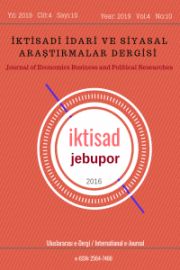 Summary/Abstract: In Turkey in the pre-1980 period, since the use of foreign currency of individuals was confined, dollarization was not a significant problem. After the decisions of January 24, 1980, regulation in the exchange regime paved the way for foreign currency to be demanded for various aims. Inflation decreases both purchasing power of economic agents and amount of cash assets held in national currency. In inflationary periods, individuals want to refrain from worthless national currency by investing their assets in investment instruments such as real estate, gold and exchange. Turkey, where high inflation has been observed for many years, is among the countries that have experiencing these processes of dollarization. In this study which investigated the relationship between dollarization and inflation in Turkey, Vector Autoregressive Model (VAR) was used as econometric method. As a result of the variance decomposition results, 0.63% of a 1% change in the inflation rate in the 10th period is explained by the dollarization rate; In the same period, 5.32% of the 1% change in dollarization rate is explained by inflation rate. The relationship between the variables was investigated by Johansen Cointegration Test and no long-term relationship was found between the two variables. According to the Granger Causality findings, dollarization rate is cause of inflation rate at significance level of 10%.