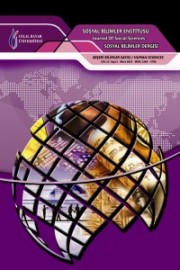 Summary/Abstract: The content of this work consists of the ceramics of İznik and Kütahya which were found in excavation carried out in Edirne Yeni Saray in 2013-2014. This palace began to be built at the end of the first half of 15th century and thereafter it was continuously used by Ottoman sultans. The palace, which started to lose its significance in classical period from 18th century, entered into the process of demolition by means of Ottoman-Russia war. Besides the architectural features of the palace with the excavation works made in different years in Republic Period, the things used in the palace are also endeavoured to be unearthed. The ceramics of İznik and Kütahya from these materials have a crucial position alongside of imported ceramics which were used in the palace. Even though the adornment techniques are the same, these ceramics of which colours and motifs show difference have the characteristics of a document in terms of reflection of pleasure approach of a period of Ottoman. While the blue-white ceramics show the adornment approach of end of 15th century and first half of 16th century, multi-coloured ones reflect the adornment approach of Ottoman entirely in solid-coloured and multi-coloured İznik ceramics. It is possible to see single and multi-coloured dyed style of Kütahya in cups which are most notably form and a couple of part of bowl in Kütahya ceramics. While Chinese influence is observed in some of these samples that are dated as 18th century, some of them shows us the style of ceramists from Kütahya entirely. In this work, it is aimed to determine the position of ceramics of İznik and Kütahya which were found in 2013-2014 within Ottoman ceramics.