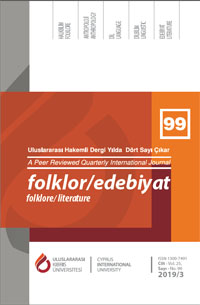 Summary/Abstract: Existentialism has influenced a lot of literary works throughout history. Existentialism can be studied in literary works by means of foregrounding the existential themes and techniques. Some of these themes are being, change, freedom, selfcognizance, isolation, responsibility, free-will, and alienation. Traversing the boundary between philosophy and literature, this essay aims to analyse the existential themes of Jean Paul Sartre’s No Exit or Huis Clos (1944) and Hasan Ali Toptaş’s Shadowless or Gölgesizler (1993) with an intertextual and comparative approach. This essay considers Sartre’s No Exit and Toptaş’s Shadowless as postmodern texts. Before exploring the existentialist themes and techniques in No Exit and Shadowless, this study aims to discuss the tradition of existentialism in literature. After presenting an introductory review on such existentialist concepts in literature as existence, essence, freedom, angst, and absurd, some recurrent themes in Sartre’s and Toptaş’s works will be highlighted and analysed.