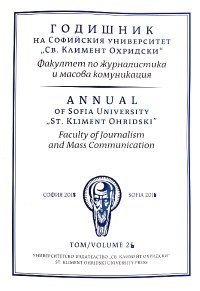 Summary/Abstract: The European Parliamentary elections in 2019 have a significance that it has never had before. The European Parliament as the only directly elected EU institution is at the center of the current debate on the future of Europe. It is supposed that the results of the 2019elections will contribute to shaping this future. The media as a political mediator have an an important role in informing citizens and reflecting public opinion. The main purpose of the proposed paper is to answer the following research question: to what extent media messages during the pre-election campaign in Bulgaria of a non-party national daily „Trud“ (Labour) are focused on understanding the changes to be made to the EP in 2019 instead of tackling of interior political issues? Using the method of content analysis, the study monitors the interpretative texts of „Trud“ daily on the topic during the three weeks of the campaign (10-31 May 2019). The study is limited to two research tasks: to distinguish the political messages transmitted via the selected media; to outline the relevance/irrelevance of media reflection to the objectives of the campaign. In the course of the study, a series of questions are put forward also, specifying the research objectives: what is the predominant argument in publications?; what is the general expressed attitude and leading intonation?; what are the main and additional topics?; what are the keywords and phrases?; are there any propaganda and manipulative techniques used to influence certain public attitudes?