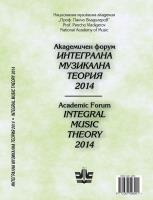 Summary/Abstract: Korsakov’s theory about the false progressions beyond the boundaries of mode and circular modulations [ложные последовательности вне пределов строя и круговые модуляции], as cited from the first, lithographic edition of his Harmony Textbook [Учебник гармонии] (1884-1885) is the first link forming the theory of symmetric modes. It gives the key to understanding not only his discoveries, but also discoveries typologically related to the 19th century music. Korsakov introduces his own terminology, applicable today, based on his creative sense, that hints at a different way for musical thought to envelop, within the boundaries of false solutions. (Circle and sequence-like modulation, modulating sequence, false progressions through the circle of large thirds, false progressions through the circle of small thirds, whole-tone scale.) While interpreting chords within the new context of harmonic relations as being the essence of tonality, and equal-interval false progressions beyond the boundaries of mode as being the result of intertonal interaction, Korsakov manages to explain them adequately by means of his theory of key relations. While the theorist Korsakov becomes more conservative in his scientific discourse, 21 Вж. Римский-Корсаков, Николай. Полное собрание сочинений \ Т. IV доп. Литературные произведения и переписка. Москва: Музыка, 1970. 93 marginalizing further his theory of false progressions in his Practical Harmony Textbook [Практический учебник гармонии] (1886), Korsakov the composer becomes more creative and innovative in his late operas, discovering anew every time symmetric modal harmonic solutions. Korsakov the theorist bases his false progressions entirely on the vertical chord principle, but the evolution of his composer’s style points to affinity towards chromatics and linearism, often leading to polymodality and sharp dissonant vertical structures of linear origin. And while Korsakov the theorist (despite the novel character of his concept) always reasons from the standpoint of major and minor, Korsakov the composer finds his own original creative way in the same system, where constructivism and rationalization are particularly important part of composer technique. This is one of the creative paths with a great potential and significance of 20th century music.