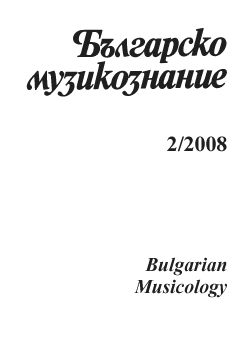 Summary/Abstract: Etude № 1 for piano reflects Dimitar Nenov’s creative attempts in the beginning of the 1930s to work out his own contemporary means of expression, compositionally- structurally based on “quasiclassical” musical foundations. The total modal organization of the hemiditone symmetrical mode (octatonic scale, wholetone half-tone scale, diminished scale) was consecutively introduced interdimensionally to all modal levels, as it brought into action the full potential of the symmetrical modal system: from the two primitive intervals used as building blocks – the hemiditone and the tritone – through the three hemiditone (diminished 7th chords) single-structure groups, to the complete hemiditonal symmetrical modal structure of Type II (2.1) in their three transpositions (Part І, Example 1, p. 49, Part IІ, Examples 8–11). The strictly followed homogenous modal-thematic foundation is tonally centering due to the sharply dissonant interval of the tritone and the major seventh c-fis-h, which functions as the central chord in the dissonant tonality, which unites the entire musical form with the help of the “technique of the center.” One of the major techniques in the textual development of the modal material is the principle of complementarity, derived from the incomplete chromatic nature of the symmetrical modes. Consecutively introduced by Dimitar Nenov both in a series and simultaneously, it leads to various levels of chromatic saturation of the musical texture with an important compositional-structural function. Taking maximal advantage of the three compositionally-technically possible forms of development of the musical material in the hemiditone symmetrical mode – uni-transpositionality, multi-transpositionality and poly-transpositionality, Dimitar Nenov masterfully solves the problem of sonic renewal. As a result of the high level of individuality within the voice leading, which sometimes leads to an extreme stratification of the musical cloth with distinct differentiation of several textural levels, clear poly-harmonic ideas are reached. “The search for the new, as-of-yet unsaid” through creative improvisation on classical experience from the position of its new modern sonic conception leads Dimitar Nenov to rethink the traditional musical form as a structural matrix for his contemporary means of expression. The symmetrical-modal creative discoveries of Dimitar Nenov demonstrate the synchronic inclusion of Bulgarian professional music from the beginning of the 1930s into the larger picture of modernism in music during the 20th century. As an individual historical-stylistic solution to the “problem of the Bulgarian”, they are the harbinger of new attempts in the Bulgarian compositional school of the 1950s by composers such as Lazar Nikolov and Konstantin Iliev.