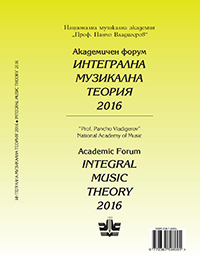 Tributes to the Work of Jean-Jacques Nattiez and Edward J. Laufer

Summary/Abstract: The two books here under review pay homage to pioneering music theorists: The Dawn of Music Semiology honours Jean-Jacques Nattiez; Explorations in Schenkerian Analysis remembers Edward J. Laufer. Both volumes present essays by leading scholars who give a richly informed account of the evolution and extraordinary range of two of the central concepts in present-day music analytical scholarship. The three-part structure of Dunsby’s and Goldman’s book reflects the tripartite model of musical semiology itself: poietics, the neutral level, and esthesics. There are numerous other ternary echoes throughout the volume. Those familiar with Schenkerian literature will be immediately struck by the untypical composers represented in Explorations in Schenkerian Theory. Also of note is the combination of Schenkerian theory with other approaches, such as narrative theory and sonata theory. The resulting multilayered analyses enable a deeper understanding of the relationship between, form, voice leading and dramatic trajectory.