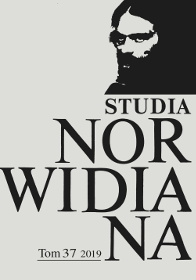 Summary/Abstract: Drawing on a scholarly polemic of the 1930s, this paper differentiates between two ways of understanding and translating Cyprian Norwid’s formula “tatarski czyn,” as ‘Tatar deed’ (from the Polish czyn) or as ‘Tatar rank’ (from the Russian chin according to the Tsarist Table of Ranks). The aim is to show how the eruptive versus the hierarchical readings of “tatarski czyn” have influenced the opinions on Norwid’s dialogic treatise Promethidion (1851) and, more generally, on his criticism of the utopian thought of Polish Romanticism and of Russian po-litics. It was Adam Mickiewicz who in the 1820s and 1830s pointed to the homonymy between czyn and chin and its potential in enacting ambivalences between the seemingly incommensurable imaginaries of eruption and hierarchy. Moreover, Mickiewicz already linked both understandings of czyn with a stereotypical Tatar, or Mongolian, “Asianness.” In this respect, Norwid’s formula is fairly conventional. What is genuinely original, however, is how Norwid turns Mickiewicz’s earlier ideas against those of the later Mickiewicz who, in his Paris Lectures on the Slavs (1840–1844), seems to glorify the “Tatar deed.” In contrast to the “bloody ladder” of Russian bureaucracy and the irrational tendency in Mickiewicz’s activism, Norwid suggests a “gradual labor” culminating in, not erupting with, the deed (Promethidion). This aspect of Norwid’s metaphorical thought is shown in a parallel reading with the philosopher August Cieszkowski who, in his Prolegomena to Historiosophy (1838), conceptualized history as a “texture of deeds” leading to institutions. Similarly, Norwid’s positive notion of the deed, i.e. his revision of Romantic activism, should be situated beyond the alternatives of eruption and hierarchy.