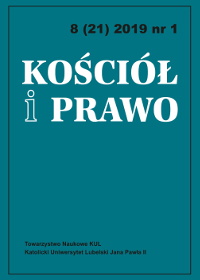 Summary/Abstract: The article examines the process of reforms in the organisation of the Roman Catholic Church in France, which were implemented during the first period of the Revolution, when the National Assembly made an attempt at introducing state control (étatisation) of the Church. At this time, no signs of overt dechristianisation and atheisation could be seen. The parliamentary reforms affected the organisational, property, and personal affairs of the Church, and culminated in the adoption of the Civil Constitution of the Clergy on 12 July 1790. However, this increased the dissatisfaction of the clergy, who hereto had supported the transformations, and caused a rift within the Church. The legislation on ecclesiastical matters was condemned by Pope Pius VI and caused an increase in anti-revolutionary sentiments, especially locally. The author makes a frequent use of the comparative method for reference only, invoking the solutions used in the area of religious relations in the subsequent years of the Revolution and Napoleon’s rule. These solutions modified the ones discussed in detail in the article.