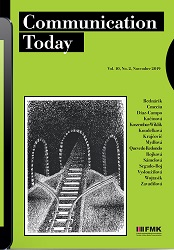 Summary/Abstract: This study focuses on a bottom-up assessment of the refugee crisis. This transformative political and social crisis situation has stirred conflicting opinions about the ways in which EU countries should handle the refugee flow. The ‘Debating Europe’ platform has launched a debate upon the solutions that MEPs and EU citizens may provide in order to deter further border crossings. Using three dimensions of the circuit of civic culture, prognostic framing and legitimation strategies as theoretical frameworks, we intend to determine the degree of interaction among the e-debaters, the salience of prognostic frames and the co-occurrences of the (de)legitimation strategies that e-citizens employ in dealing with the refugee crisis. The findings show that despite the low interaction within this debate, e-citizens preferred to simply post their opinions about this crisis and to cast their online vote for the MEP’s solutions. The critical assessment of the refugee crisis revealed that while some e-citizens invoke a discourse of fear or of benevolence, others highlight the importance of contextualising the situation, making a plea for conditioned solidarity and exclusive integration.