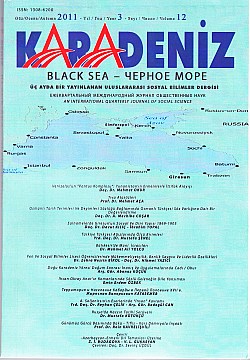 Summary/Abstract: In this study, we will try to confirm and comment about the bad female being generally calling ‘witch’ or ‘greedy’ which mostly damages to new born not to maternity, even causes death of it through the belief and practices related to after birth collected from the Eastern Black Sea Region. The word of witch appears out as “cazu”, “cazi”, “cadi” at the local pronunciations in the Eastern Black Sea. It is seen that in this region people believe the beings called “alkarısı”, “albasması”, “albız” with the witch. But it is also seen that people in this region have a separation about a point that alkarısı damages to maternity as witches damages to new borns and young animal. In the introduction of our study, it is tried to give information for explaining the role of good and bad soul on the belief and practices related birth. In the main part of our study, after the belief and practices related to witches which bother children of animals and people are presented, it is tried to make evaluations on those topics. In this part, it is focused on this witches appearances or identities, methods of recognition to them, places that they come and live, methods of their encroachment and methods of protection from them and the closure for ability of their witchcraft. In the conclusion, it is tried to make evaluations on the roles of the witches related the after birth belief and practices origin on that locale in the light of narratives collected from that region. The narratives, that compose the basis of our study, are collected from oral convention with the method of area research. It is tried to comparative analyze propped up sixteen narrative belonging Giresun, Trabzon, Artvin and Bayburt. While six of these narratives are collected by us, five of them belong to Chepnis from Giresun and the one of them belongs to Çarşıbaşı,Trabzon. The other narratives were collected and published by other searchers. In this study, it is benefited by the written sources together with oral sources.