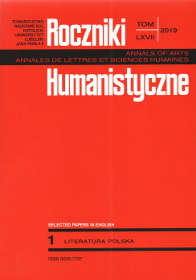 Summary/Abstract: The Polish version of the article was published in Roczniki Humanistyczne vol. 61, issue 1 (2013). The presented material contains the first edition of an unknown story by the writer and poet Stanisław Czycz (1929–1996) with an introduction concerning the history of the work and with the editor’s commentary. The typescript survived in the writer’s home archive. Owing to another archive record it was possible to establish that the humorous sketch was written for a competition organized by the Magazyn Turystyczny Światowid. It was also possible to try to date the text more precisely. The rules of the competition said that its aim was to arouse writers’ interest in the subject of tourism and to win readers for good fiction dealing with this subject. The story is about a Sunday trip to the woods. The protagonist meets his friend who is riding a motorbike and offers him his company. The confrontation of the lover of walking tourism and the motorcyclist ends with the former one winning it. A cheerful tale has the same tone as Czycz’s Krzeszowice stories printed in the Przekrój weekly at that time, and then published in the volumes Nim zajdzie księżyc (Before the Moon Sets) (1968) and Nie wiem co ci powiedzieć (I Don’t Know What to Tell You) (1983). It reveals a different face of the writer, whose debut was the innovative And (1961), and who, after writing Ajol (1967) and Pawana (Pavane) (1977) was called the Polish James Joyce.