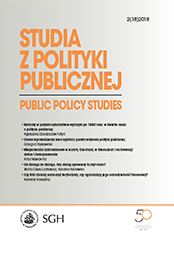 Summary/Abstract: The lack of planning and disorder of Polish space results from the current political and legal as well as cultural determinants. The latter are strongly associated with deeply-rooted factors such as national identity and past, collective mentality. One can recognize them as long term factors. The aim of the article is to show how the series of various above-mentioned variables affect the shape of urban space including modern Warsaw and selected Scandinavian experiences as the context. The author also pays attention to two latest pieces of legislation - so called Urban Landscape Act (2015) as well as the lex developer case (2018) and analyses their influence on the national spatial policy system as well as - burdened by the past and certain cultural patterns - chaotic landscape of Polish cities.