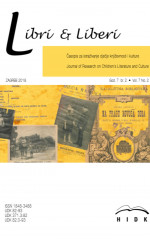 Summary/Abstract: World War I had lasted for over four years and came to an end on 11 November 1918. This date marks the beginning of a phase of the formation of a new political landscape, which would only be finally acknowledged by the Treaty of Versailles of 28 June 1919. Despite the fact that the outcome of World War I brought independence to Polish lands, which beforehand were under Russian and Austro-Hungarian rule, the Province of Posen was still part of the Prussian state. Its Polish inhabitants had to fight for independence for themselves. On 27 December 1918 they took up arms against the local Prussian authority in Posen (Poznań) and so the Greater Poland Uprising of 1918/1919 began. Thus, for Greater Poland, World War I ended with a delay in contrast to the rest of Polish lands. German families and their children living in the Province of Posen at that time were rendered natural witnesses to those historic events. For this reason, some German children tried to portray their experiences from their child’s perspective in the form of various literary works in order to pass them to their peers or their descendants or just to textualise their memories. Child authors recounting the Polish national uprising of 1918/1919 had already started their writing during the said events or continued to write down their child’s-eye impressions over shorter or longer periods in the form of various notes, descriptions, memoirs or in a historical novel of a more or less agitating character.