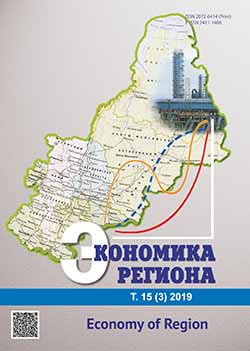 Summary/Abstract: Khanty-Mansi Autonomous Okrug — Yugra (KMAO) is the North’s most industrially developed region and the key supplier of the oil and gas resources. Moreover, it is the historical homeland of the small indigenous peoples of the North (SIP). The problem of saving the KMAO’s traditional economy is relevant to other North regions, too. The paper analyses the evolutionary changes in the traditional nature management on the developed territories. Additionally, it establishes the methodological tools to substantiate the possibility of the SIP’s entrepreneurial activity and its main directions. We hypothesised that the traditional nature management, which determines the necessity of the entrepreneurial activity’s development, is volatile. We revealed the reason for the fisheries’ low profitability in the traditional economy and proposed the ways of increasing the efficiency of the traditional sector’s enterprises. Furthermore, we demonstrated the role of the state and corporate structures in supporting traditional industries and traditional ways of the SIP’s living. An analysis of the development of the traditional nature management in the historical perspective has revealed the instability of this kind of activity of indigenous ethnic groups. The instability is caused by several threats of political, socio-economic, environmental, institutional, demographic nature. We demonstrated the specificity of the modern state of traditional nature management in the territories of active industrial and transport development. Traditional nature management involves reindeer herding, hunting, fishing and collecting the wild crop. Furthermore, we considered the forms of organizing the enterprises of traditional nature management. These forms include communities with the stable legal status, non-profit enterprises, limited liability companies, reindeer herding companies, trading posts. We formulated the reasons for the strengthening of the ecological threat, caused by the expansion of the areas transferred to the oil companies for long-term lease, which negatively impacts the environment in these territories. We suggested the methodological tools for substantiating the possibility for the entrepreneurial activity of indigenous ethnic groups. We have depicted them in the form of algorithm of the wild crops’ harvesting and processing in the territory of Russkinskaya settlement that belongs to Khanty-Mansi Autonomous Okrug.