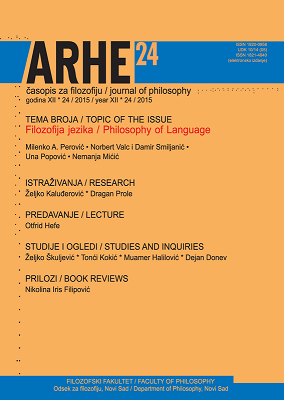 Summary/Abstract: The authors are proceeding from the one-sided viewpoint as a result of absolutization of the analytic way of thinking in contemporaty philosophy. In four theses they present the weak spots of the official Analytic Philosophy (absolutization of the logical moment, disregard for alternative media, one-dimensionality of the favored ordinary language, »softening« of the rigorous assertive claims). In order to overcome these shortcomings but also acknowledging the achievements of the analytic way of thinking (such as ideal of clarity, unified method, self-criticism by critique of language) at the end of their paper the authors make out a case for an integrative understanding of language which is including new aspects of the phenomenon of language (effective, expressive, creative aspect) not only the aspects figured out by language analysis (logical-semantic and pragmatic aspect of language).