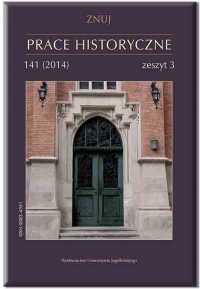 Summary/Abstract: Although the question of women’s vocational development in Galicia has been studied from many scholarly perspectives, it was rarely a subject of separate studies. In the presented article the author deals with main trends in women’s vocational development and with features that characterized the process of women’s gaining the labor market in the years 1880–1910. On the basis of the results of Austrian censuses published in both main all-Austrian and provincial periodicals, it was possible to state that women’s vocational development was of a traditional character. Little participation in that phenomenon belonged to the non-agricultural sector. In comparison to other Polish regions as well as to those of Austrian crown lands Galicia appears to have been very poor and unfavorable. (Trans.: Antoni Sarkady)