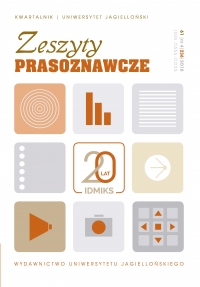 Summary/Abstract: In March 2018, the presidential elections in Russia ended with an unchallenged victory of Vladimir Putin with 76.69% of votes and 67% of voter turnout. The main propaganda instrument that helped to increase his popularity was television, which had to show Putin as the only possible candidate and at the same time, decrease the percent of opposition`s support. To achieve these goals there were used interviews and presidential election debates, which were organized in a way to minimalize any voice of opposition in Russia. The work is based on qualitative analysis of TV content in two TV channels from November 2017 to March 2018. The aim is to show the mechanism of mass media, which was formed to use these elections in a favor of the current regime: from tidily selected candidates, who had to increase the magnetism of such an event, format of debates itself, to instruments of black PR which are present in every election campaign in Russia. The result of this article is the extension of knowledge about the functioning of the media system in the Russian Federation and the opening a discussion about the political-media relationship on the example of a chosen country.